My advice to you is “aim high.” I would not give a fig for the young man who does not already see himself the partner or the head of an important firm. Do not rest content for a moment in your thoughts as head clerk, or foreman, or general manager in any concern, no matter how extensive. Say each to yourself. “My place is at the top.” Be king in your dreams. Make your vow that you will reach that position, with untarnished reputation, and make no other vow to distract your attention.

Let me indicate two or three conditions essential to success.  You all know that there is no genuine, praiseworthy success in life if you are not honest, truthful, fair-dealing.  There is no credible future for you else. Otherwise, your learning and your advantages not only go for naught but serve to accentuate your failure and your disgrace. I hope you will not take it amiss if I warn you against three of the gravest dangers which will beset you in your upward path.

The first and most seductive, and the destroyer of most young men, is the drinking of liquor. I am no temperance lecturer in disguise, but a man who knows and tells you what observation has proved to him, and I say to you that you are more likely to fail in your career from acquiring the habit of drinking liquor than from any, or all, the other temptations likely to assail you.

The next greatest danger to a young businessman in this community I believe to be that of speculation. There is scarcely an instance of a man who has made a fortune by speculation and kept it.  Resolve to be businessmen, but speculators never.

The third danger against which I shall warn you is the perilous habit of endorsing.  “How can I refuse to lend my name only, to assist a friend?” Let me endeavor to put you upon safe honorable grounds in regard to it. I would say to you to make it a rule now, never endorse.

I beseech you to avoid liquor, speculation, and endorsement. Do not fail in either, for liquor and speculation are the Scylla and Charybdis of the young man’s business sea, and indorsement his rock ahead.

Assuming you are safe in regard to these your gravest dangers, the question now is how to rise to the position we have imagined for yourself.

I can give you the secret. It lies mainly in this. Instead of the question, “What must I do for my employer?” substitute “What can I do?”  The rising man must do something exceptional, and beyond the range of his special department.  HE MUST ATTRACT ATTENTION.

There is one more sure mark of the future millionaire; his revenues always exceed his expenditures. He begins to save early and invest it securely in anything which you have good reason to believe will be profitable.  Capitalists trust the saving man.  It is not capital that your seniors require, it is the man who has proved that he has the business habits which create capital.  Make a note of this essential rule: Expenditure always within income. 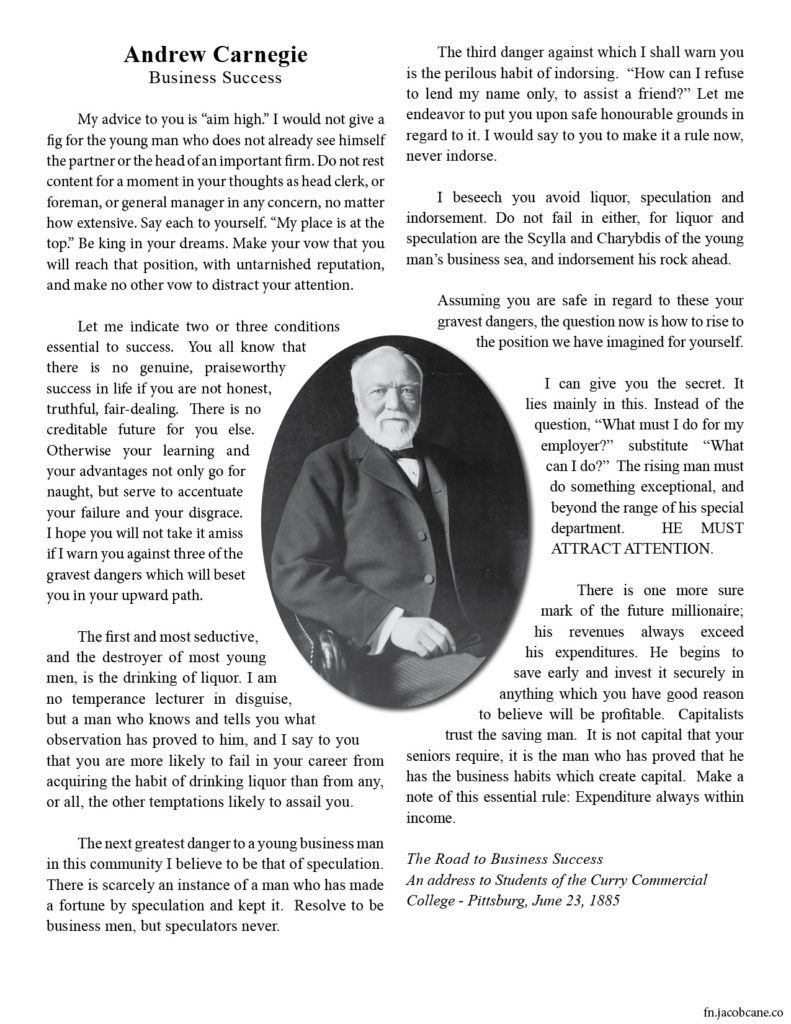 Top Tips to Build Your Brand Persona from Scratch

How to Bring That Creative Spark into Your Branding